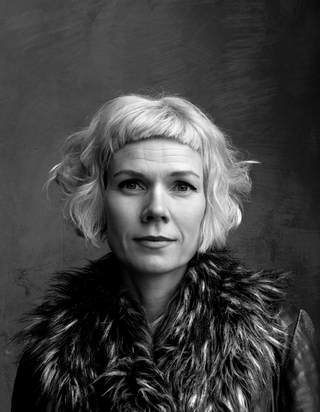 Hanne Ørstavik – who was invited in Bucharest to speak about her book Love (Iubire), on the 19th of March – is one of the most representative contemporary Norwegian writers. She wrote nine novels and she is best known for Love (translated in Romanian at Univers Publishing House), which made it on the sixth position at the literary contest organized by Dagbladetpe magazine in Norway, with the topic The best Norwegian books of the last 25 years. We talked with Hanne Ørstavik about the way her novel took shape, about the various aspects of the notion of “love”, about how she managed to be a single mother and to make a career out of writing and how supportive is Norwegian society of young mothers who want to write.

The novel Love has a quite ironic title, as the relationship between the characters displays a rather lack of love. Where can we find love in this story about Vibeke, a young mother who tries to find closeness and affection wherever she can, and her son, Jon, an eight year old boy? Why Love, when actually it’s more like… The Absence of Love?

I think you put the finger right on the spot of the novel, but I don’t have any answers, it’s a novel that kind of opens these questions you raise. I started writing this novel when my daughter was newly born, that is 18 years ago. My daughter was so tiny, I had just got her from the hospital, holding her and I was so afraid that she would not be sure that I loved her, it was almost a desperate feeling, how could I be sure she would feel loved when she got older? Of course, I guess this fear also mirrored the fear of not being loved. I was also thinking about language and how someone can say to you “I love you” and you can believe it, and then somebody else or the same person coming to you in a different moment, saying “I love you” and feel that that’s just a lie; but the words are exactly the same. I wanted to explore this slippery feeling by writing this novel.

So the characters feel love, but they just can’t express it?

I don’t know to what extent the characters feel love: one of the scariest things in the novel is that you don’t really know that. Vibeke does all the right things for Jon – except that night when she should have been there, she should have remembered his birthday –, she takes care of him, she cooks for him, she takes him to school. From the outside, she does all the right things, she’s a good mother. But is she? That is quite the question of the novel. What is to love and how does that show? My conception of the novel has also changed. When I wrote it, I was very concerned about Jon, and he was really my heart in the novel. But now I also feel close to Vibeke – she is a grown woman and she longs so much for love from men, she is craving for love too. Jon needs Vibeke and Vibeke needs a man or someone to love her. They are all needy and this itself is a vulnerable position: how can you be a parent if your own needs are so strong?

This isn’t your first book in which you use the symbol of closed doors. You also used it in Blue Room. What does it mean to you?

I haven’t thought of it as a symbol at all, for me is very concrete, the door is closed: in Love, Jon is closed out, and in Blue Room, the daughter is locked in. If people want to see it as a symbol, they can do it, but to me is more important that feeling that the last scenes convey: Jon waiting outside the door in the cold, and the feeling in Blue Room, given by the young woman who is stuck inside the room – I wanted the reader to experience this feeling rather than making it an intellectual gymnastics strife.

The two characters, mother and son, seem to be living in two different worlds and yet, so close. There is no visible narrative mark of shifting from a plan to another. Why did you choose this narrative strategy? It even seems that the characters are engaging in a sort of absurd dialogue.

It wasn’t something that I planned, the language sort of created itself. In my other two novels before this one, there were short texts on each page, with a lot of open space between them, so the reader was the one who had to construct the narrative line. They were more like pictures, closer to poetry, in a way, and I thought that that was the only way I could write, because I hadn’t tried something else. So I started this new novel and I thought that if I was to expand my narrative – and still I thought I could write short bits –, at least I could have two persons. First I started to write about Jon, then a little bit about Vibeke. After writing 25, 30 bits of their stories, I realized they don’t have the quality of poetic images, they were more like a flow. So I though why not put them together, smash them one into another? I did it, and it worked, so I continued to switch the narrative. So it was just a coincidence it turned out like this. It’s interesting that they are so separated, but so close in the text.

Vibeke doesn’t even seem to be thinking of her son, sometimes it’s like she doesn’t even have a child. Did you intend to criticize a certain behavior improper for a mother?

I know it has been read like that, but I wasn’t interested in that kind of issue, for me the existential and emotional themes were the important ones. I tend to think more and more that love is a presence, the ability to be present in the moment, with what you have, and share what you feel. She has these dreams and fantasies, which are expressions of her longing. It’s quite sad, because they take her away from the possibility of sharing another kind of love, the love you can have with your kids. But Vibeke is not a monster. I actually can recognize myself in her.

In this extreme longing for love.

“Being a mother forced me to change, to grow up”

How much being a mother influenced your writing? How is your relationship with your daughter?

I learned so much from her, she is brilliant and I think having a child is like a journey into learning how to love, how to be a parent. The way she needed me forced me to change, because I’m a single mother and I’ve been alone with her and it was always a challenge: I couldn’t do what I always wanted to, she was my responsibility and I had to fight with my anger, with the question why am I not free, and it was a big process for me to accept that anger and, in the same time, be there and be ok. I changed and I’m so thankful for those challenges, I learned to be more present with her and now our relationship is wonderful.

Being a mother forced me to change, to grow up, and sometimes we need to be forced to change. Having a child gave me a lot of structure in my life and, besides that, it gave me the sense that I’m not alone, that there is someone close to me all the time.

How did you manage to find your freedom as a writer, as a woman, while being a mother?

We have a very strong social welfare system, and it has a very good framework for helping single mothers and single parents. And we are well integrated in the society, we are expected to work, I’ve never heard things like “Oh, you’re a mother, you should quit writing”, on the contrary. In Norway, it’s so natural to be a single mother and to work/ write, it’s not even an issue. Being a mother didn’t prevent me to follow my dreams. I wanted to become a psychologist, I studied psychology at university, but then I started the creative writing class and, during that time, I wrote my first novel. I hadn’t even imagined I knew how to write a novel, it was a surprise for me too. I sent it to a publishing house and I got a letter from them and a letter from university at the same time. And I chose to explore my stories. That was my big choice in life, jumping into something so insecure. To have a baby… that just happened. I’m very happy I made that choice, but it has been tough and some time ago, whenever I finished a book, I would tell myself that now I’m free to return to university, but then along came another book and another and so on. But now I know that writing is what I have to do and I’m so thankful for it.

Is it possible in Norway to sustain yourself only through writing?

Not entirely. There are some possibilities to earn three year artistic grants, but it’s like half an income, so you have to do some other stuff too, like translations. Norway is a very small country, so selling books doesn’t make you rich, there aren’t enough readers.

Vibeke and her son live in a remote place in Norway and, at one point, she says that, as a cultural counselor, working at the city council, she engages in the process of promoting culture in order to prevent people to migrate to bigger cities. Is this a problem in Norway?

It’s not such a huge problem, as I hear it is Romania, the politics has been, for years, focused on districts, on creating a good life even in remote places. Of course people tend to move to the center areas, at least to the center of the regions, but it hasn’t become a problem.

In that remote place, where people see the coming of the fair as the biggest event of the year, Vibeke tries to keep her sense of identity through books. For her, literature is a safe place. Do you think books can help us find our safe place?

I think we can use literature for many things, including as a safe place. But, on the other hand, books can be disturbing, challenging, they can make you sad and angry and they can lead you to places in which you are not confortable at all. But even though, this experience is a good one, because it enriches you inner space.