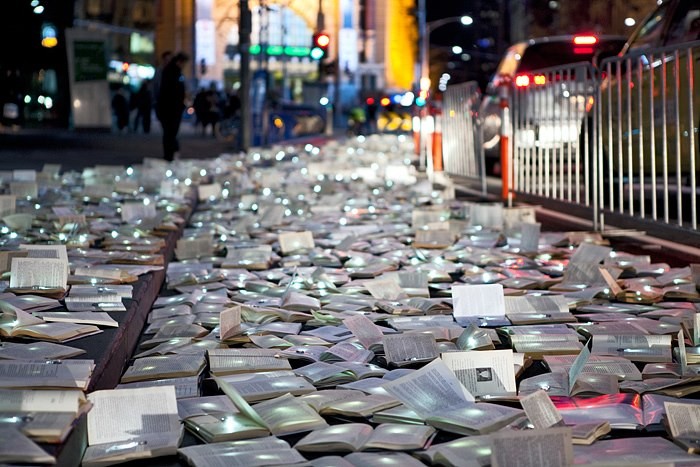 Luzinterruptus is a group of Spanish urban artists who became known by the Romanian public through the street event organized by the newspaper Ring and Litera Publishing House called The night of the open books. The whole event was based on an idea taken without credit to Luzinterruptus, to whom it belongs.

You’ve recently come to the attention of the Romanian public when, on the occasion of a local event advertised as “Night of the open books” or, better yet, “3000 books for free, come and get’ em“, several sources, including Bookaholic, denounced the idea as being unoriginal, a theft of intellectual property, and belonging to you.

Your reaction came only after the event took place. How did you find out about this?

We learned of this through the statistics on our blog, references to Bookaholic started to appear and thanks to this we became aware of what had happened, with the resulting displeasure.

What are your claims and what did the event organizers respond? Do you intend to take legal action?

Our demand is that they clearly specify whose the original idea was, with our name, a link to our action, and of course a reference to our photographer whose photos they have used without asking permission.

The organizers refuse to acknowledge that the idea was ours because they say that the concept is different, they also believe that authorship is sufficiently clarified with the word Melbourne and a link.

It is probably more difficult for them to explain why they have used some pictures that are copyrighted and have been published without the consent of the author. They must understand this as they are a publishing company and know the laws, we hope that our photographer will undertake his own action against them.

You are urban artists. You work with light and darkness and make installations, small works of art which last briefly on location, ephemeral like most forms of street art, living on only through accounts, photos and basically carrying on exclusively online, long after they are gone. This being given, how can the urban artist protect his original concepts and ideas?

Within the world of street art there are not too many problems with the issue of authorship, nor in the Internet world where “nearly everybody knows” that there has to be a scrupulous mention of the author of the piece or the source of inspiration.

In addition, we are already sufficiently popular that it makes it more difficult to copy us without the whole world knowing in the end, which has been the case with what we’re talking about now. These plagiarists don’t care because the advertisers don’t care at all about ethical and moral codes that are not punishable by law, but if it had been an urban artist who had done it, they would not have emerged unscathed by their colleagues and the world of urban art in general.

In any case, as we have already said, we do not care if other people reinvent our piece, we would proud, what truly distresses us is that these organizations have to be for-profit, using the image of politicians to legitimize an advertising campaign, dressed up as a well intentioned citizen.

We’ve already told our readers about your two book installations, but probably they want to hear first hand from you. Tell us more about the two happenings, the smaller one in NY and the other one in Melbourne – how they started, how difficult it was to make them. Did you consider repeating the installation back home, in Spain?

First we did a small scale test in Madrid, which we are prone to do illegally to have some fun, we wanted to test the strength of the idea and whether or not a few books truly could steal space from the cars public streets.

When we saw that no vehicle actually dared to drive over top of the books, we decided to enlarge it and carry it out in New York organizing an illegal, protesting action to take advantage of a visit that we had already scheduled. To carry this out we organized a group of friends, we got books donated from the a lawyer’s library and risking expatriation if the police caught us, we went out into the street on a freezing day in February and in the end the books cut off a main street in the area of Dumbo. It was a great experience.

In Melbourne the experience was different, since it was organized for a festival, with books discarded from public libraries and many volunteers helping us in a participatory action of large dimensions, which also served as a stage for artists, writers and performers to present their own work. We have great memories of this.

We noticed quite a different public – at the Romanian event and at the one in Melbourne. Your books were also free, weren’t they? For anybody to pick and take home? How did the public respond to that? The people seem quite enchanted with the idea, as we see in your photos from back then, how did they react to the glowing books?

Everyone approached the installation with a lot of respect and there were no acts of vandalism, it must be said that they were already familiar with it given that the piece was growing and gaining ground in sight of all for a month, each day we put about 400 books in the street, so, many people knew what was going to happen and it created a lot of anticipation for the last day on which people could take the books away.

There was no need to take large quantities of books, there were 10,000, enough for everyone, so that people could calmly stroll among them and choose the pieces that they liked the most, the piece was there until the early hours of the morning so there was plenty of time to walk around and even sit down in the river of books, and we also offered books to those who passed close by with their cars.

Among your installations my personal favorites are Literature vs Traffic in Melbourne (because of all the “epicness” of the flowing river of lights and books), and the glass jars flowing from the water fountains, the river trapped in plastic bags, and the fountain reaching out with dozens of hands, and the beds not for sleeping… ok, I have a lot of favorites, but which one is yours? What’s the installation that required the biggest amount of effort and was the most rewarding?

We like each one for different reasons and the majority of them have to do with sentimental themes, the people with which we have done them, the context, what has happened afterwards….but one that we particularly like is called, A lot of Policeman for so few people…, it was not too big and not of the more showy ones, but through it we presented a minimum cost piece with a highly effective message, it was also one of the ones that made us more well known in the world of urban art, in which scarcity of means and a powerful message are values that are taken into account.

And one last question – Romania is not very accustomed to artistic interventions, street art and installations – maybe because one needs clearances and acknowledgements for anything taking place in public spaces. How do you manage to make all those things? Do you work guerrilla or do you have the green light from the authorities? What’s easier – or what do you prefer – to work by yourselves or to associate with events, festivals or museums?

Madrid is where we work more and we like to do so more, it is what we know best and that is why we feel more comfortable with what we have. But, unfortunately, the public space is very controlled and you can do “almost nothing” without asking for permission, which of course is not granted if you do not pay for it, so we work in an illegal manner trying to be invisible to the authorities and completing everything very quickly so that we are not seen and to be able, as well, to leave it free so that people find  it by surprise.

We normally stay to watch what is happening with the piece from a distance, watching the reaction of the people who usually carry away the pieces, and sometimes we have to pick up what has been left behind so that which there is no trace and that people are not disturbed by the garbage.

Of course we love to do protest pieces without a permit, we believe that the public space belongs to the citizens and should be the place where the art is more present so that it reaches all of the public without discrimination.

But we also like to work at festivals, in small doses, as it allows us to carry out pieces on a larger scale and complexity and something very important to us, it allows us to meet interesting people, both those who help us as well as those who see the finished piece. In addition, it enables us to travel to different countries to see other public spaces and their uses and abuses.
Romanian version (with photos)