“There are a lot of people for whom the only commandment is the eleventh: «Don’t get caught»”. Interview with James MEEK 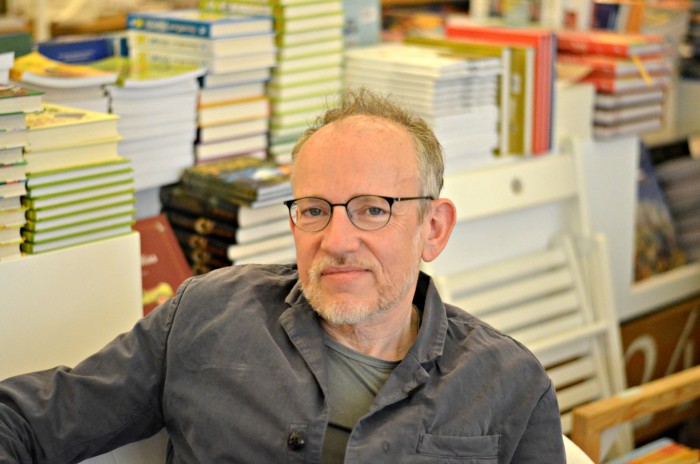 British writer and journalist James Meek (born in 1962, in London) was a correspondent for The Guardian, reporting from many war areas, such as Afghanistan or Iraq. As of 2006, he dedicated entirely to writing. His books received various prizes, such as Scottish Arts Council Book of the Year Award, Royal Society of Literature Ondaatje Prize for The People’s Act of Love, 2005, also nominated for Booker Prize.

James Meek was invited in Romania, at the International Festival of Literature and Translation (1-5 October 2014) in Iaşi, where he talked about his latest book, The Heart Broke In (translated in Romanian by Carmen Toader, at Humanitas Fiction Publishing House). It is a modern saga, telling the story of a brother and a sister, Ritchie – a former rock star – and Bec, a scientist trying to find a vaccine for malaria –, seemingly very different, but both struggling with surviving in a world in which you can no longer tell right from wrong.

We spoke with James Meek about the boundaries between truth and betrayal, about what can be thought of as moral and immoral nowadays, about freedom and illusion, and also about his different styles of writing, from magical realism to a literature within the sphere of the possible.

The book raises several questions about what is moral and what isn’t in nowadays society. How relative are morality and the concepts of good and wrong?

You always come back to this ambiguity right and wrong, on one hand, and secrecy and discovery, on the other. Sometimes, when I’m talking about the book, when people ask what’s it about, I say it’s about the eleventh commandment: “Don’t get found out”. It does sometimes seem that there are a lot of people for whom this is the only commandment. One of the questions the book poses is: if you do something wrong, is it the same thing when the only person who knows it is you as when everybody knows, does this transgression somehow undergo a transformation when it moves from the private to the public? Something I’m still not sure about and I think we can all think of examples when we’ve done something and it never seemed the same thing after other people knew about it as it did when we did it.

This ambiguity is also reflected when tackling other notions, such as freedom or forgiveness. At one point, Bec makes a comparison between us and the bacteria analyzed at the microscope – what if we are also seen under a microscope and we only think we are free?

It’s just a thought that occurs to her and sometimes you see these horrible presentations of human action that do make us seem like microbes. I suppose most people would find it interesting, but there is an animation of the movements of planes around America in 24 hours, there’s always those little dots of planes, speeded up so you see them swarming out from the big cities into other directions. And then the cycle begins the same every day, think about all those individuals going about their important, busy lives, reduced to this sort of microbe-like level. But I don’t think it’s like that, I do think that each of these dots has much more meaning than that and neither I, nor Bec really thinks that there is an equivalence between a single cell and us. Still, there’s a sign of the fear there’s a biological mechanistic, deterministic motivation for our actions. For me it’s crazy to deny there isn’t some biological elements to what underlies our decisions, but it’s equally crazy to say that all comes down to biological determinism. I am convinced, from my own experience, that the human being is greater than the sum of its parts, that there is more to us than chemical switches, which have a role to play, but there is will, there is consciousness, you can always coolly decide to do something which is the opposite of what your hormones are screaming at you to do. You can refuse the cake that you want, you can not go and sleep with the person you shouldn’t be sleeping with.

The title The Heart Broke In entails a very strong metaphor of the disparities between the real feelings of the characters and their actions. What else can we see behind it?

There is a character, Harry, who is a very strong one, a sort of patriarch of science, and to be a man who is famous for curing [one type of] cancer, but he himself is dying of cancer, is annoying to him. It’s his farewell party and is recalling a story when he met this Russian scientist who had a theory about the way human beings evolved. There is this genuine mystery in science, even if you accept evolution, about how we went from being one cell to being more than that. It’s easy to see how we went from being apes to being humans, but from one cell, to eight cells, to one hundred cells is a little bit more difficult. So this scientist has this idea that each of the parts of the body evolved separately, as little animals, so there was a little lung animal, a little kidney animal and so on. He has this theory that the heart was originally a separate creature and it sort of joined the body and in the way the story is told, the heart breaks in to this proto-creature.

And of course, the heart is a very powerful and familiar, almost clichéd image of the secret of the emotions. In that sense, there are moments when Harry is facing death, when there is this sense of some feeling for others breaks through. When you are facing the end, your thoughts are not abstract, nor necessarily selfish. You want to have this feeling that somebody cares, but also that you care about others. It’s reflected I suppose in Tolstoy’s Ivan Ilyich, but for me there is a sort of proof of this as well now, in the age of the mobile phones, when people are close to the end, perhaps they prey, we don’t know, but what we do know is that they reach their mobile and call their mother or their lover or their children. And we know that because that’s what happened on 9/11, whether it was the people in the planes that were about to crash into the buildings, or the people in the burning buildings, and I’m sure in any other similar situations less famous around the world people were using their last moments to send a message to those they cared for. There is a moment when Harry realizes that is worth all the trouble of the universe just to have that touch of one person to another.

At the end of the story, Bec says that, at the core of the human being lies the idea of goodness and that she has always strived to find that moral foundation of the world and that behind it, there must be goodness.

As far as goodness is concerned, I’m not sure. I do think that there is that desire to be good, the desire to be seen good or even the desire to believe you’re a good person – and this is something that Ritchie has very strongly, he wants to convince himself he is a good person, but I think almost everyone is like that. Perhaps there are people who have reached that stage of absolute desperation, who have just given up any sense of themselves as people who can be saved, but most people always try to find some way of keeping some corner of themselves that is protected, that seeks to explain how it came to this and that there is still hope.

How can we see the idea of morality in relation to art? I’m referring to the moment when Ritchie decides to make a documentary about his father’s murderer.

Ritchie has in fact embraced the world of the shallow and cynical and of the money seeking, even though he likes to think that, by making this documentary, he can go back to the world of artistic truth. But I think the reader is inclined to be skeptical of whether this is going to work, even if he could make the film. This is the modern day confession, rather than going to the priest, you go to the people with your memoir and people are shocked and fascinated and just the act of sharing your transgressions with society it becomes a form of absolution.

You described your first novels as “magical, dirty realism”. How would you characterize The Heart Broke In?

The fantastical element has pretty much fallen away. There are things that have not actually happened, as far as I know, there is no parasite that gives you protection against malaria, there is not literally a Moral Foundation, although sometimes it seems there is, but everything is in the boundaries of the possible.

I was trying to write something that has, in some limited ways, the characteristics of the 19th century novel, which we think of as a sort of a standard of the realist school. The view of the history of literature is rather distorted by the parallel history of art. Just because art went from super representation to expressionist and abstract, we think it must be the same in literature, Zola is Ingres and James Joyce is Picasso, I think that’s a very simplistic look at it.