„If we where to be judged by what we think, then the worst and most horrible people in the world would be writers”. Interview with Mikkel Birkegaard 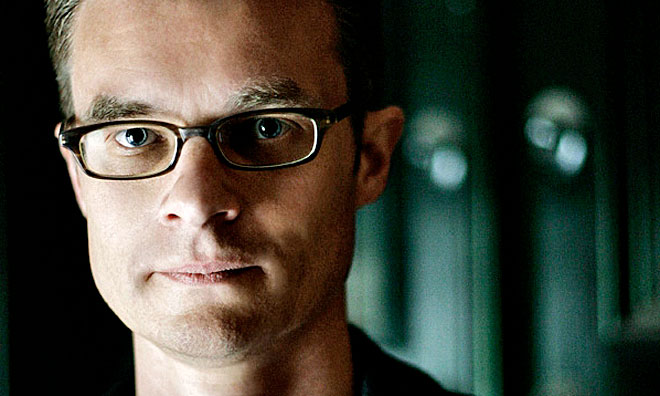 One of the most unique Danish contemporary writers, Mikkel Birkegaard, who actually works in IT, made his debut with the novel Libri di Luca (2007), which immediately became a bestseller, and in 2009 published his second novel, Death Sentence. He writes fantasy-mystery novels, with twists that remind of detective novels, so we talked about the relationship between reality and fantasy, about responsibility and about the unseen power of the books.

Your literature combines a dark atmosphere, a very realistic depiction of details and a style specific to mystery writings. How would you describe your writing and how did you become interested into developing not only thrillers, but also a more refined, poetic, fantasy plot, such as in The Library of Shadows, which slightly reminded me of The Name of the Rose?

I would like readers to think of my books as adventures. I hope readers like to take a journey into a world that maybe looks like something they know, but where there is something more/beyond what meets the eye. So I would not be interested in writing a „strait” fantasy novel, but prefer a mix of realism and some fantasy elements. When I read books myself, I really like that „extra” dimension to the story that brings the experience farther away from the daily life, but still is recognizable. In The Library Of Shadows the fantasy element is the power of the readers, in Death sentence the journey is into the (dark) mind of the author where the mystery is about what really happens to Frank Føns and why.

I’m very fond of The Name Of The Rose, but it’s on a completely different level – Eco is a genius.

In Death Sentence, you chose a tricky motif: the found manuscript, a classic motif. The idea of a copycat is also a classic one, and still you proved that inovation is possible. How did you come up with this kind of combination: found manuscript, crime plot and a very realistic, brutal description of murders and, in general, of reality?

The idea for Death Sentence came from a conversation I had with a girl to a party. She claimed that if a person just thought of another person than his/her girlfriend/boyfriend it was the same as being unfateful. I did not agree. I think it is dangerous to judge people alone on what they think. After the conversation I realised that, if we where to be judged by what we think, then the worst and most horrible people in the world would be writers. They spend their lifes thinking about violence, torture and murdes! Not only do they think about it, they also write it down! (and some times even makes money by it …)

So that inspired me to write a book about a writer of horror books, and when that was decided, I realised that I had to write the story as the writer in the book would have done, with all the gore and details it demanded.

Regarding the found manuscript motif, it attracted me because it puts an extra layer to the story. Can we trust the writer? What is it really we are reading? I love to read such stories myself.

Do you believe in the power of books to influence reality so much that, eventually, we can’t even tell what is true and what is fictional?

That is a difficult question to answer. It can depend on how we see the differences in reality and fiction. Sometimes we say that something is „stranger than fiction” if a real event is so unlikely that we almost can’t belive it. In that case there is no difference. It can be related to the answer before, about being judged by though and not whats real. That happens all the time, I think.

Another take on the question could be how a book can change the reader.

I believe that books influences its reader a great deal. Books can give the reader insights into persons and places they would never meet or go. Hopefully the reader can use that experience in his/her own life, maybe by acting more openly and accepting differences of opinions.

Do you feel the burden of being a succesful writer? Does this make you feel you have a responsability?

I don’t feel burdened in my daily life. Sometimes though, when I think about my stories being published in foreign countries, I can get a bit overwelmed, but I don’t feel compelled to write a specific type of story or a series. The Library Of Shadows and Death Sentence are very different books, and my third book (From The Book Of Dreams) are also something else (even though its closer in theme to The Library Of Shadows).

If I feel any responsability, it is to try to write something thats not on the book shelves already and to entertain people before all.

In Death Sentence, Frank Føns becomes a character, trapped in his own plot. Do you ever feel this way?

In a way, I have been trapped. I wrote Death Sentence as a story of a person who is judged by his surroundings by what he thinks (and writes), and after the publication I myself have been confronted by several readers who thinks there is something wrong with me, since I can think up such gruesome scenes. They suggested that I seeked help. So in a way I proved my point with that book – I was myself judged by a work of fiction and was a victim of my own trap …

As your character, Frank Føns, you ventured into a very graphic depiction of the murders. Do you believe that written violence can trigger real violence?

No, like Frank I believe that if someone is inspired by a book to commit violence, its not the book thats wrong. The person would do it anyway at some point, he/she is just looking for an excuse.

Did you ever have to deal with a fanatic reader of your books?

No, fortunately not. Some readers are surprised of the graphic depictions in Death Sentence, and have written to ask me why, but I have never felt stalked or insulted in any way.

Nordic literature has a very strong tradition of crime novels. How do you explain this affinity?

For me it seems like Nordic writes are very influenced by americans, but add their own nordic „flavor” – a kind of tone (mostly dark) that can be a bit melancholy. I’m not sure where this tone comes from. Maybe the ever changing (bad) weather, maybe the short days in winter.

Before becoming a writer, I suppose you were a very passionate reader. Did you believe then – or hope – that there can be people who have special abilities through books?

I think there is. There are some people who are exceptionally good at reading aloud – often actors. They can really captivate the listener in a way that transcends the text itself and pull the listener into the story so that we almost forget where we are. That was in fact my inspiration for The Library Of Shadows: what if they could do more than „just” fascinate you with reading a good story?

Have you ever been seduced so much by a book that it made you think that books can contain a more special power than you ever believed they could?

I had a feeling like that when I read The Neverending Story as a boy. That was a very overwelming experience. The story was terrific and the whole idea with the story influencing reality and vice versa, was very intriguing. I felt that there was a special relationship between book and reader – both inside the story, but also between myself and that book, and every other book after that for that sake.

Books lives by being read and in return, the books changes us – that’s a powerful thing.