„The worst thing for you as a writer is to begin to plagiarize yourself”. Interview with Kei MILLER 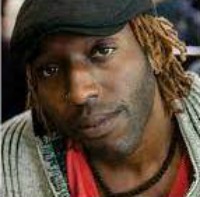 Born in Jamaica, Kei Miller now teaches creative writing at the University of Glasgow. In 2006 he published his first poetry book, Kingdom of Empty Bellies (Heaventree Press), then a collection of short stories, The Fear of Stones. He is also the editor of the anthology New Caribbean Poetry (Carcanet Press, 2007). In Bucharest, as a guest at the International Literature Festival, we had the chance to speak with him about his activity as writer and as a teacher, about written verse vs. spoken verse and also about how he thinks a writer should reflect Jamaica in literature.

You live between Jamaica and England: how do you feel the transition between two cultures? Does this make you feel torn apart between two identities?

You studied and now you teach creative writing. How did this class help you develop as a writer and how does one of your classes take place?

I think there are always principles that are helpful. This kind of question isn’t asked so much if you’re talking about a singer. When you go to a show and the singer’s voice cracks, you know it’s bad singing, it’s not something subjective, and that’s that. You go to a dance show and the dancer tries to do a leap and falls, you know it’s bad dancing. We don’t always apply this to creative writing, but like every form, you can do it badly. Teaching creative writing is like teaching how to sing without your voice cracking or how to dance without falling. And those principles are pretty solid, and of course there is one point when every form becomes magical and you can’t teach that. When I started teaching I thought I have to figure what my students are trying to do, because everyone has their unique voice and I have to think what your unique voice is and that I have to help you achieve that voice, I shouldn’t impose myself. Now I believe I should impose, in the sense that I should give my students the right and the ability to resist me. But there are certain things I am able to do right, as a writer, and I should teach you what I can do as a writer and give you the right to resist it and give you the tools to resist me, and even encourage you to resist me.

Do you feel the need to speak about Jamaican realities, and how should you tackle them?

I think I write to tell a truth, which is very different from telling the truth. There’s no such thing as the truth. If you begin by writing from that overly precious point of view where you are telling the definitive story of your world, than I become immediately suspicious. But if you have the integrity to say that there are several stories, several different ways of living in a place like Jamaica and you want to tell one of those stories that hasn’t been told yet, than yes, I think you should write. I want to tell a story, but I never ever assume the stories I tell are the only stories.

You edited the anthology New Caribbean Poetry. How did you make the selection and how would you describe, in short, this new Caribbean poetry?

Part of its definition would be that the new Caribbean poetry is trying to resist the herd mentality. Caribbean comes out of a colonial history with Europe and a big part of that was built on the idea that they kind of owned the language. For me, it has to do with reconstituting English, to the fact that English was not the property of England, English was mine and I didn’t care if he thought I used it with different grammar, if I used it with a different accent. This is a big part of what Caribbean poetry is, saying to England it doesn’t own English. It’s about doing new things with the language, just taking English away from England.

How do you see the difference between the written and the spoken word in poetry? Do you believe that a read poem reveals new meanings?

This may sound strange, but I think that when you read a poem the opposite thing happens, you don’t give it new meanings, you give only one meaning. When a poem is on the page, it has several meanings, when you read it, you decide on one of those meanings. That meaning can be all the more powerful, because you’re taking away the poem from its multiplicity and choosing one thing to focus on. Sometimes there are pauses or a line break that makes you read in several ways. When you read it, you can’t explain everything that happens in that line break, but for me, a poem doesn’t work until I’ve figured out how to get the sound, an actual sound, on the page, to write without an awareness of how it sounds is not to write. As much as people might compliment me for reading a poem, I feel more excited when someone who never heard me read says how lyrical and beautiful it is. There’s one moment when I read at a book festival in Edinburgh, and I thought it was a really good reading, and one woman came to me and said “Oh, you’ve read so beautifully, I’m sorry, I didn’t buy the book, because I’ll never hear it like that in my head”. And I thought, “Damn it, I read so well, that she won’t buy the book”.

You said that you don’t like to write in silent places. What is the most unusual place you’ve written?

I write on planes a lot, on trains, I wouldn’t say I like to write in noisy places, but there is this idea of the writer who wants to go off the hills, in a complete silence – most writers are like that, they want absolute silence, and I don’t want that, i like to engage in what happens around me. It doesn’t have to be loud, but I definitely like to write with things happening around me, because that influences the writing. So planes and trains are probably as strange as you’ll get. Writing is what I do and if I go off on really quiet beach, I don’t want to do work. The thing I would never do when I go to a place like that is to write, because that would be back to work. When I come back into the city, where everything is busy and happening, then I write because I’m back at work. That makes sense to me, not to most people.

In your poems, you can feel a strong religious note. How important is religion in your life and your writing?

For writing, extremely important, for life, not so much. I grew up in an extremely religious country. As opposed to Europe, in Jamaica you’re always assumed to be religious. When I went to England, people would assume you’re an atheist. But it makes me have a complicated relationship with religion, because I grew up in a culture like that. I think religion can be a very beautiful thing and I’ll always respect it for its rituals, for the poetry behind it. But as a human being engaged in the world, I’ve seen how sometimes the religion that professes love has been a very hateful thing for some people.

I used to be very religious, but those moods came very naturally to me, but I always have to give myself the freedom to critique it. So it’s important in the rhythms I use, but not necessarily important in my own life.

What do you think is the biggest mistake a writer can do?

The worst thing for you as a writer is to begin to plagiarize yourself, so after every book I had to teach myself how to write again.

What is the thing you work most on, as a poet?

As you said before, the sound of a poem, that is the hardest thing I work on. If a read a poem, I want it to sound to you like it came out like that. I could edit a poem for a year before it sounds like that. You have to sweat over writing, but I don’t want you to feel the effort, to see the sweat. If people compliment my poems because they sound natural, I’m most proud of that, because it takes a lot of work.