Robert Simonišek: “I think all writing should be the expression of inner necessity and that poetry, essay, prose are just different forms to express essential things” 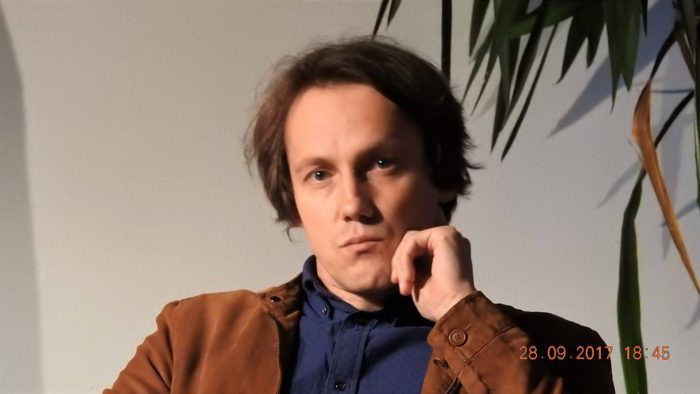 Robert Simonišek was born in 1977, in Slovenia. He is a writer, poet and art historian. He has been a tour guide for several years. After achieving PhD in Art History, he taught at University of Ljubljana. At the end of October, he was invited at the 6th edition of the International Festival of Literature in Timișoara.

You have a PhD in art history. Also, you are a poet. Has art influenced your poetry?

Yes, visual arts have somehow influenced my literature, poetry, essays and prose. I did not want on purpose to take something from paintings or involve architecture as a significant background. On the other hand, the dialogue between art and literature goes deep in the past: from the very beginning we use language to describe the visual world and we think in images when we write or read. It is a reciprocal relationship which we are not fully aware of in everyday life. However, art is not the only subject of my books.

What is your PhD thesis about?

My PhD thesis was about Art Nouveau. I did research on Art Nouveau in Slovenia. Art Nouveau (or Secession) was a European phenomenon that spread between 1895-1910, before the real modern era started to breath. It’s that kind of style that you admire, but in a sense it’s also kitschy because of its ornamentation and decoration. It’s the last European style that looks into mirror of past epoques and styles, before art embraced modernism, its tendencies to simplicity, straight forms, emptiness etc.

Did you focus on Slovenian artists?

On one hand, I tried to find out how this phenomenon was integrated into European atmosphere, on the other, I was investigating typical Slovene subjects and motifs.

You wrote poetry, a novel, a book of essays and also critical art. Was it difficult to move from poetry to another genre?

I think it was natural to go from one to another. I started with poetry. In the beginning, I didn’t want to publish at all. I was focusing on my study and poetry was just something that happened. Then, after my first book was published, I started to prepare material for another. Meanwhile, I started to write criticism and continued for several years. At a certain point I found out that I don’t want to evaluate other writers or poets and just have enough time for myself. My short stories were quite poetical and my poetry narrative from the beginning. So, this border has never been sharp for me. When I wrote my book of essays, I felt how I have to involve more logic and at some point reduce poetical elements. I think all writing should be the expression of inner necessity and that poetry, essay, prose are just different forms to express essential things. The “real literature” is a mixture of genres. I think that systematic distinctions between fiction, non-fiction, visual poetry, social critical poetry etc. is also the result of academical simplification and book marketing strategies of the 20th century.

Our lives are not just a pure criminal or love story, a social critical novel or psychological drama –they have elements of love, joy, fear, struggle to survive, which we can not isolate from each other. The question nowadays is how to entirely absorb pieces of broken reality. The best novels I’ve read were mixtures of different genres. Once you start from yourself, you don’t think about such distinctions. Maybe you think that this is gonna sound like a detective story, but you just move from one page to another without really having in mind that you have to follow some sort of rules.

You travelled a lot in Europe as a tour guide. What can you tell us about being a tour guide? When did you start and why?

It was an appropriate solution during my studies. Then I stayed for several years as a tour guide and tour director. I mostly worked for foreign offices and companies. It allowed me to explore, to see many countries and visit places I could have never seen on my own. I also did some extra trips (for example, to Italy) to do some research or just to wonder around, not really to collect data for my new book. I was living actually two extremes: one life was with the group and the other half was alone or with my girlfriend, being away from the crowd. Staying in tourism for almost a decade you get tired of people asking you not really intelligent questions. Since I am as a curator involved in international exhibition projects I still have to “move around”. The Slovene literary scene is small and local, you soon know everybody and it’s getting sometimes weird to have just the same readings in the same places with the same people. I’ve been to a couple of festivals around Europe and residencies – for example in Wales and Berlin. However, staying for one month with the purpose to achieve something serious in your writing or just to understand better the “otherness” of culture, it seems like too short period for me. The most challenging part for me is the working process itself. As many other individuals who hesitate and think a lot, I was looking for something unique in my life and I suppose with years you get higher standards in writing too.

Is it your first time in Romania? How do you find it here?

Yes, I’m here for the first time. I am surprised actually. Coffee is great here. My parents visited Romania recently and explained to me a few facts about the situation here. I read a couple of Romanian authors, like Mircea Eliade, Emil Cioran or Mircea Cărtărescu. I was aware of the fact that Romania is a big country and that you have many authors and a rich history, but I never went deeper. I was more focused on German, Slavic and Latin tradition.

Is the translation of Romanian writers a problem in Slovenia?

I think we have few great Romanian translators like Aleš Mustar or Lidija Dimkovska, who are also authors. The interest for Romanian writers and poets increased in the 90s, when Slovenia attained independence. Even if the real life and political situations were not exactly the same, there were many similarities because of the attitude towards communism. Slovene intellectuals at that time “calculated” this could be something interesting to dispute and for people to read about.

Geographically speaking, you came from West to East. Is there a considerable difference between the West you came from and this part of the East?

Observing the faces and architecture there is not quite a difference. Well, one could be the landscape. The first thing you get is landscape. I’m not used to flat regions because I’m surrounded with hills and the Alps. But people, habits and culture are more important, for sure. There is a slight difference, I think. It seems like people here are more relaxed and not so tense, not so workaholic as they are in Slovenia. I appreciate this easy-going flow in countries from East or South-East Europe. But sometimes this could be bothering if you need to be efficient. I would need at least one week extra stay to break the stereotypes about your country and claim with certainty about my experiences here.