Last week, on the 8th of February 2017, at ARCUB, the show “Bucharest nowadays is beautiful, isn’t it?”, realized by the Romanian writer Denisa Duran and the Austrian composer Bruno Pisek, has had its initial performance in Bucharest, Romania’s capital. One week later, on the 15th of February, at Green Hours pub, it was the second performance of the radio-poetry-show. Between these two events, I talked with the two authors to find out more about their project, about how they met, how they created this unique show, its structure and so many other things, which I invite you to read in the rows below. After all, “Bucharest nowadays is beautiful, isn’t it?” is a thrilling premiere, a smart, original and fresh mix of poetry and music, shouts and whispers, sounds, voices and words, a performance with which one meets rarely.

How did you two meet? And when did you decide to catch the sounds of Bucharest in this radio-work and performance called “Bucharest nowadays is beautiful, isn’t it?”?

Bruno: We met in steps. First in Vienna for an interview about sound poetry. Second for a recording of Denisa’s poems in the waiting room of Gara de Nord in Bucharest. Third again in Bucharest to create the radio-piece.

The decision was already made during my first staying in Bucharest for the shooting of „Periferic“ by Bogdan Apetri. During those six weeks I recorded a lot of sounds.

Denisa: That is: 2008 – the Vienna meeting. I was studying sound poetry for my master thesis, with a scholarship from Schule fur Dichtung, and I was trying to meet artists who were performing this. The interview with Bruno was one of the most consistent. Then, 2009 – when he came to Bucharest, for the first time, he was the sound engineer for “Periferic” – who, by the way, was nominated for the Gopo awards here for the Best sound. Which is quite special, for Romanian movies… I had just published my second book, the bilingual “Disposable People” by Galway publishing, in Ireland, so these poems that we recorded at Gara de Nord, bilingual, were from this collection.

Following 2009, we started to develop, in the e-mails, this idea of a new common project about Bucharest, with two points of view – the foreigner and the inhabitant – and in three different languages: Romanian, German and English. We met again in 2014 to work on it – we made new sound recordings, sat together to choose the suitable poems and create the structure of the radio-work. We also gathered friends for a choir and recorded some poems with them. We finished the radio-work one year later, when it was broadcast by ORF Kunstradio at the National Austrian Radio, in November 2015. It can actually be listened to here. And now we performed it on stage for the first time in Bucharest, with the support of the Austrian Cultural Forum. 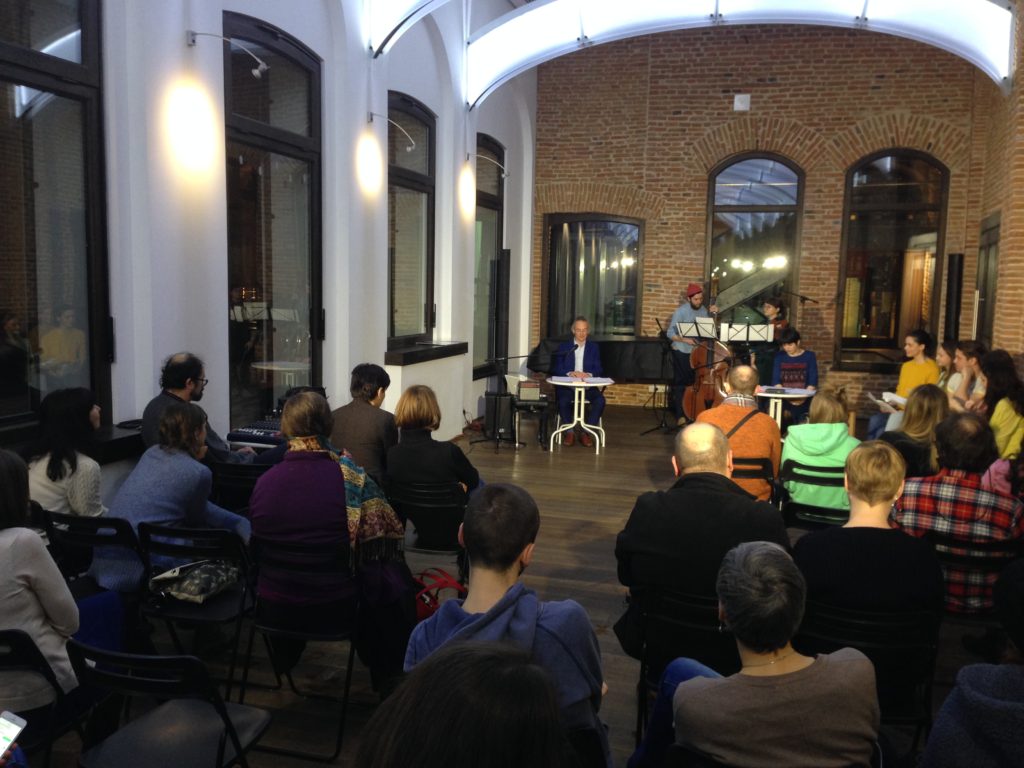 Photo from the initial performance of “Bucharest nowadays is beautiful, isn’t it?” – Bucharest, 8th of February 2017

Did you follow a plan or an initial script or did you improvise and put everything together? In other words, how did your collaboration work?

Bruno: We worked on the dramaturgy first. There have been a lot of ideas, some recordings and quite a number of texts. Then we started to follow that plan. With some alterations until the final mix.

Denisa: We started with the sounds of Bucharest recorded by Bruno in 2009 and with my three poems about the city, recorded at Gara de Nord. Bruno wrote some poems about Bucharest as well, which were developed on his second visit, five years later. That’s why his poems have more sections, according to the way he perceived the city over time. I started to gather from my collections all the poems I had written, related to Bucharest. Over these years, back in Vienna, Bruno also created some music compositions inspired by the place and connected to the poems we both already had. The turning point was in 2014, when we sat together and worked for a whole week on the structure of the program. It looks like an engineer chart…

We decided to focus on topics such as: nighttime in Bucharest, with the sound of cicadas; everyday life with the rush of the people and the never-ending reconstruction of the Romanian scenery, by workers; short description of the dusty, abandoned city Bruno first experienced in the days of the drama shooting; a look back in the past, for both of us – with a confession of Bruno’s first visit to Romania, in 1988, and with my poems about childhood memories for the communist years; and finally, a look into the future, either full of hope or simply distrustful… We ended our performance with a recording of the nowadays protests in Romania, against corruption, which started at the end of January, bringing hundreds of thousand people in the street. One of Bruno’s lines “Thereʻs change here” is the perfect conclusion after this traveling in time over the last nine years.

Poster of the initial performance in Bucharest, Romania

The radio-show which was broadcast in 2015 at the Austrian National Radio was 51 minutes long, so it wasn’t quite different from this one-hour version of the live performance. How did you structure the show then and now?

Bruno: The structure followed the structure of a standard broadcast of broadly used radio-formats. A combination of spoken word, music, music signals (like stingers, bumpers, signations), moderation, and acoustic quotations. (We only skipped the advertising and the traffic information). We then replaced these elements with our elements and figured out to put together a narrative out of poems and moderation/presentation in two or three languages combined with composed music and composed music signals together with the field recordings. We did the same for the live-performance, we just made the details a bit different, because the audience has also the visual elements on stage, so it is better to keep the audible universe a bit less dense.

Denisa: And the narration in the radio-work turned into a dialogue between the two of us, on stage – with spontaneous gestures, of course – and

The verses were read on many voices, functioning like a choir, and in three languages: Romanian, German and English. Is English the “bridge” between Romanian and German and, therefore, the choir a “bridge” between Bruno Pisek and Denisa Duran?

Bruno: Nice idea, the choir as a bridge. We shall think it over. English is the bridge between us, the crutches so to say, neither of us speaks the other‘s language. But multilingualism is this treasure of Europe. And we both like this treasure. That‘s one of our main bridges.

Denisa: in the radio-work, there are two choirs, in fact: a Romanian one and an Austrian one – or, rather, the multi-lingual choir Bruno has founded and is conducting in Vienna, am I right?

Denisa: The Romanian choir in the performance here stands for a group of teenagers – maybe sitting on a bridge – sharing with us their critical view upon life, caught in the poems.

Poster of the second performance in Bucharest, Romania

You both contributed with poems, each with another perspective, on the one hand we have the foreigner, on the other hand we have the inhabitant. Can you select just one poem each that represents the whole show?

Bruno: I can‘t. I also can‘t reduce Bucharest into one poem – except it comes in a form like Pablo Nerudas „Canto General“ or as the „Epic of Gilgamesh“. Can you, Denisa? 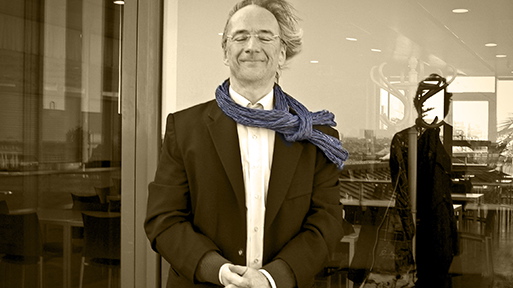 The show “takes place” in the past, present and future. In the end, the last sounds we hear are not from the future, but from the present: the recent protests in Bucharest. And the sentence “There’s change here”. I suppose it was a last minute decision. What is your message? What do you think the protests will change?

Bruno: As it is hard to record sounds from the future we took the recent voices of the people in Bucharest (and Romania) to open up our piece to the actual perspectives and hopes here. Not so much „last minute“, but like our first ideas for this poetic radio cooperation again connected to our observation of everyday-life in Bucharest.

Denisa: It was very important for me to include this sound review of the protests here, the recordings that I made during these days. One cannot any longer tell a story about Bucharest without making reference to these moments, which have already changed the history of the city. It is the beautiful sound of the people asking for justice, the sound of dignified people no longer ready to hide the flaws of their political leaders, the sound of people who have gained back their self-esteem during these days, as a people, and who are cherishing the memory of their martyrs in a moment of silence. 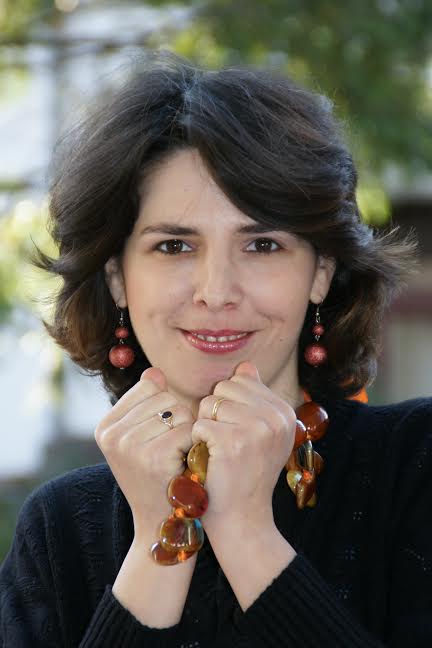 Does the project continue or will you stop it in this version? Did you think about publishing it somehow, in a digital form, let’s say?

Bruno: Continuation yes, but we shall keep the combination of solo voices, speaking choir and music as a form. New poems related to the new situations are possibly taken in. We‘ll know more soon.

Denisa: It is a work-in-progress. We still have a lot of ideas to develop it. Some of these could be relating it to some other towns is Romania, performing it abroad, with the translation of the texts in different languages, broadcasting it in Romania as a whole and publishing a book with CD, yes.

Whom would you recommend “Bucharest nowadays is beautiful, isn’t it?”?

Bruno: To everybody who seems to need some joyful ideas – and to everyone who feels sorry to live here.